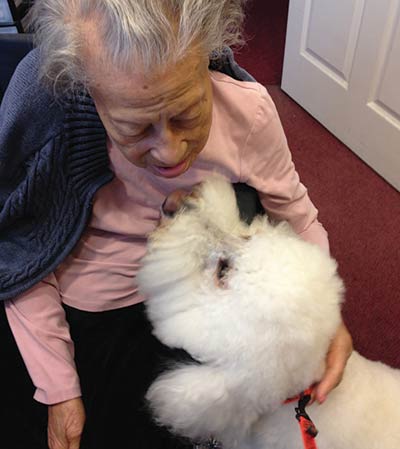 It was a little after 4 a.m. For hours, sleep would not come. I desperately wanted to visualize heaven and connect it to the “Rainbow Bridge” poem. My mother had passed away the day before, and, six months earlier, my 4-year-old goldendoodle, Leo, died suddenly.

The relationship between the two was unusual (to say the least) since my mother wasn’t fond of pets — of any kind. That is — not until the dementia diagnosis that came at the age of 92. I can picture it now: She, a tiny, delicate, frail, little lady and he, weighing almost as much as she, with legs long enough for her to ride like a pony.

As months turned into years, my mother struggled with my name. She talked a lot to me — about me — and believed my daughter was my sister and thought my son was a “nice young man.” Yet, she always recognized Leo. When she could no longer remember his name, she gave him a new one: “Poochie- Poochie,” and he always brought a smile to her face.

My mother lived just two months shy of her 98th birthday, and her presence is still greatly missed because I had her in my life far longer than most. Her absence at times seems ginormous for that same reason.

On that dark and silent lonely night, I tossed and turned having private conversations, convincing myself once again that everything (and I) would be OK, someday. Memories of a time only months earlier, when I was forced to begin my life without Leo became strong, vivid and so powerful they caused me to get out of bed.

In 2015, thousands of people debated the interpretation of Pope Francis’ words when he consoled a tearful child whose dog died. He said, “One day, we will see our animals again in the eternity of Christ. Paradise is open to all creatures.”

With the sun still tucked far behind the curtains of the sky, I started to think about heaven and the poem — and how (if possible) they could be connected. I know about heaven, and I’m somewhat familiar with the poem “Rainbow Bridge,” but I needed to know the origin of the story.

The story of the “Rainbow Bridge” tells of a green meadow located “this side of Heaven” (i.e., before one enters it). Rainbow Bridge is the name of both the meadow and an adjoining bridge connecting it to heaven.

According to the story, when a pet dies, it goes to the meadow, having been restored to perfect health and free of any injuries. The pet runs and plays all day with the others. There is always fresh food and water, and the sun is always shining. However, it is said that while the pet is at peace and happy, it misses its owner who had to be left behind on Earth.

When the owner dies, he or she comes across the Rainbow Bridge. It is at that moment that the pet stops what it’s doing, sniffs at the air and looks into the distance where it will see the beloved owner. Excited, the pet runs as fast as it can until it is in the owner’s arms, licking his or her face in joy while the owner looks into the eyes of the pet who was absent on Earth, but never absent in his or her heart. Then side by side, they cross the Rainbow Bridge together into heaven, never again to be separated.

I read this story several times from various sources. Each version gave me comfort and consolation. In the middle of the night I sat, perched at my desk scrolling through dozens of photos on my computer. Through waves of tears I couldn’t stop smiling.

The world of dementia in which she lived was different from mine, yet she seemed content in it. He was clumsy and awkward, but oh so gentle and loving with her, and, in him, she had found a true friend.

So, as the sun began to rise and the sky embraced the light, there was peace in my spirit. Although my mother was never Leo’s owner — his pet parent — she was a part of me, and, somehow, I knew in my heart that would be good enough for him.

I believe Leo knew it was OK to “sniff the air” and run as fast as he could to my mother that evening. Side by side, they crossed that Rainbow Bridge together into heaven. And to this very day, I am fine believing when the time comes, they will both come back for me.