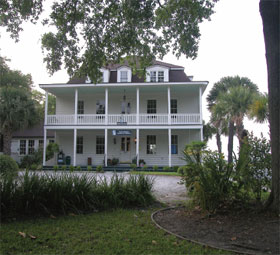 It took years of thoughtful planning and vision to make the thriving community of Daniel Island a reality. photo taken in Daniel Island, SCNot long ago, the island, which is within the Charleston city limits but also in Berkeley County, was nothing but acres of farmland and marshes. Now it is a nationally acclaimed town designed to provide its residents with a true feeling of community–a slow-paced, small Southern town in a modern setting.

Daniel Island’s developers incorporated many historic design features of the neighborhoods of downtown Charleston. The homes are set close to the quiet, meandering streets to enhance the neighborly feel and feature large covered porches, ideal for chatting with neighbors. Wide sidewalks crisscross the island, making walking to stores, schools and parks a practical proposition. Everything residents need, from dry cleaners to dentists, is available on the island.

Though Daniel Island is a collection of carefully planned communities, considerable work has gone into maintaining the rural feel of the island. Large thickets of live oaks, draped with Spanish moss, and towering palmetto trees remain untouched, giving the newly developed island a well-established look and feel.

Daniel Island features several spacious parks with playgrounds and open grassy spaces and is home to a golf course designed by Tom Fazio that is rapidly earning a reputation as one of the best courses in the area. Each April, the world’s best female tennis players compete in the Family Circle Cup at Daniel Island’s Family Circle Tennis Center. The stadium also hosts Davis Cup matches and is a popular venue for outdoor concerts. Blackbaud Stadium, one of the country’s premier soccer-specific stadiums and the home ground for the Charleston Battery, is also on Daniel Island.